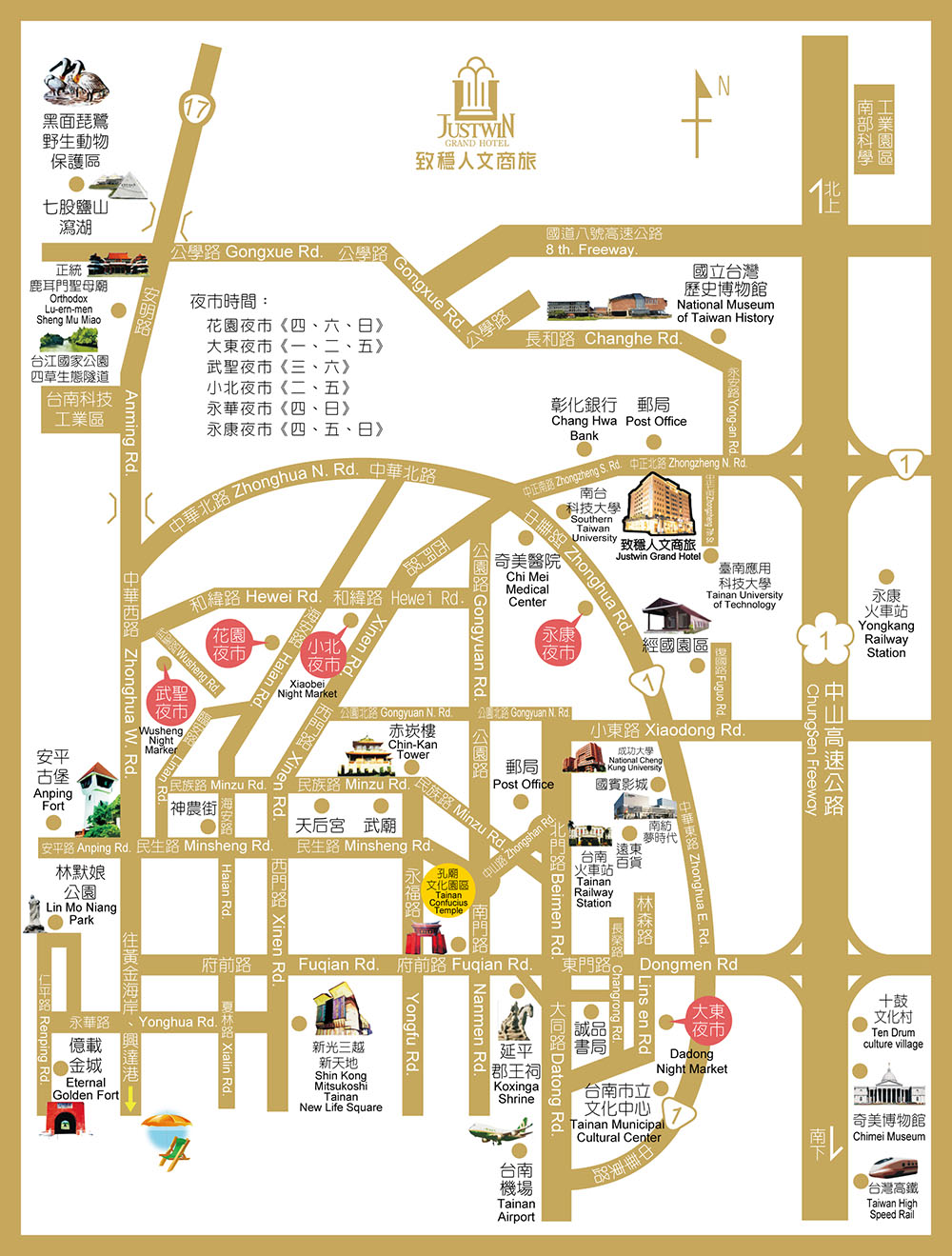 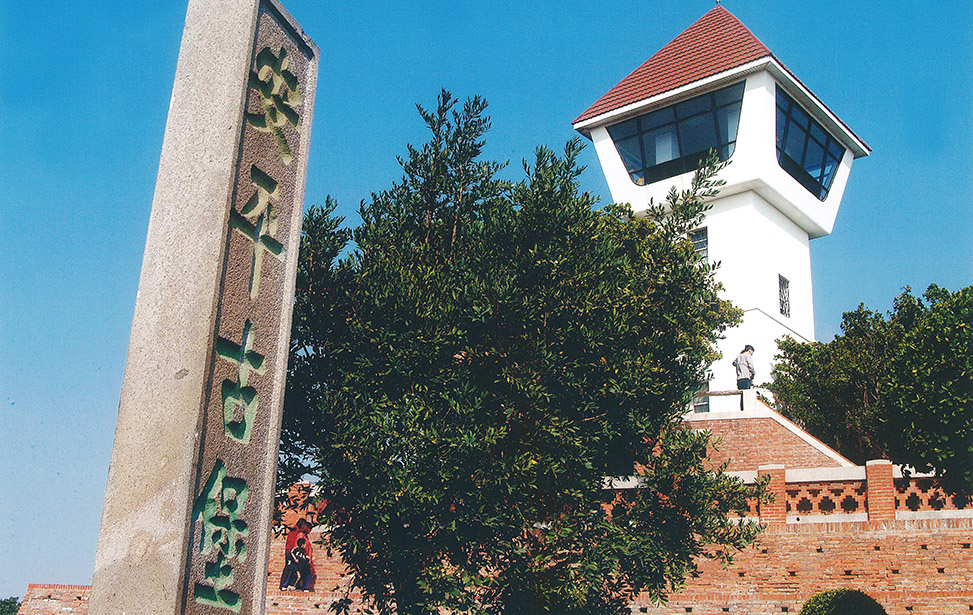 Yanping Street, alias Taiwan Street or Shih Pan (Stone Plates) Street, is located to the east of Anping Fort. It was the first street established by the Dutch 300 years ago, following the urban rule of Taiwan set up by the Qing government. The street was about 2m to 3m wide, allowing pedestrians and bicycles to pass through. However, it was not wide enough for cars to go in. In some ways, it was built for “people only.” In 1994, taking suggestions from local residents, Tainan City Government widened the street. When the construction work was about to proceed, people concerned about history strongly suggested that being the first street in Taiwan, it should be preserved. They blocked the street to hinder the construction, which was suspended then. However, local residence lost their patience, and they strongly requested the city government to proceed as planned. To uphold the rights of local residents, Yanping Street was torn down. But Jhongsing Street and Siaojhong Street, which were parallel to Yanping Street were preserved, allowing us to see their past glories.

Chimei Museum, founded in 1992 by Mr. Wen-Long Shi, is a renowned private museum with the richest collection in Taiwan. The founder’s early childhood museum visits served as seeds that later blossomed into his profound appreciation for art and culture. He has a dream of building a museum that is for everyone to enjoy and appreciate, and a place for people to cultivate their minds and souls. Chimei Museum is a comprehensive museum with wide collections of Western art, musical instruments, weaponry and natural history. There are four exhibition rooms, one temporary exhibition gallery and a sculpture hall in the main building. As a museum for all, it is hoped that visitors will enjoy and cherish these timeless valuables, and find their favorites among them.

Beimen District (北門區) in Tainan City has become a popular spot for tourists with its well-known Crystal Church (水晶教堂). The church, opened last year, has a romantic atmosphere, making the area the most attractive spot for couples to take wedding pictures. The church is near the Beimen Visitor Center. The building's surroundings were planned as a theme park of love, with many exotic buildings and art structures to fascinate tourists. The salt pans nearby are also a tourist attraction that represents the special cultural legacy and ecosystem in Beimen.

The God of War Temple is one of the oldest and most unique temples in the country. There’s debate about when it was actually built, but by most accounts it was built in 1665 during the early days of the Zheng era. The exposed wall on Yongfu Street is a distinct feature. It is called a horseback wall because its shape mimics a rider on horseback. It supports five different styles of roofs, including the decorative swallow-tail style. All of this conforms to the style of “Southern Min” temples in Fujian Province during the Ming Dynasty. Unlike most temples in Tainan, the layout of this temple is not symmetrical. While most temples have a main hall and then smaller shrines flanking it on either side, the temple compound for the God of War Temple extends a bit to the rear and greatly to the left of the main hall with only the street to the right of it. 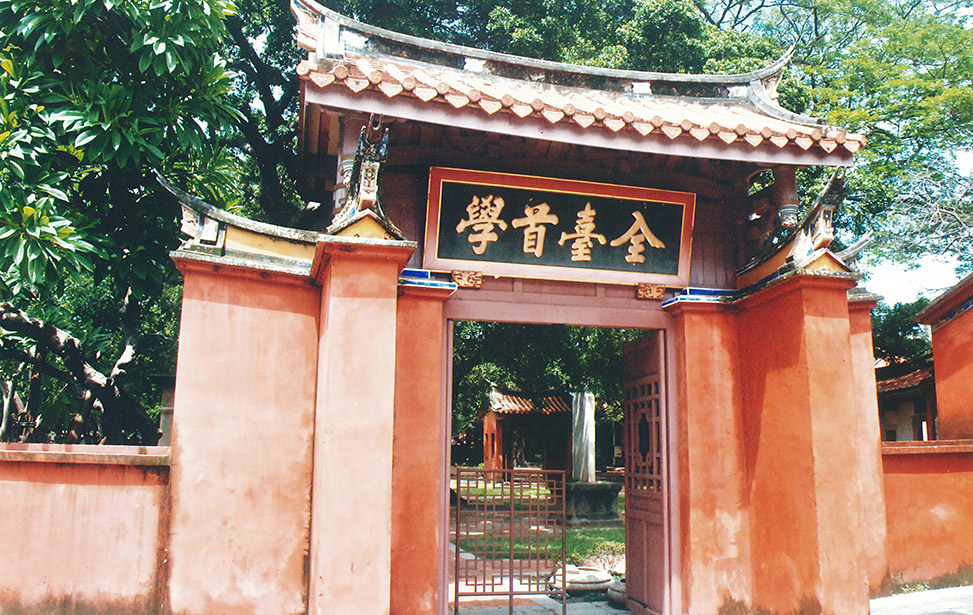 Confucius has been honored as “Supreme Sage and Teacher” in Chinese history and culture for the past 2500 years. The temple for worshipping Confucius served as both a site for ceremonial rituals and educational endeavors. In Taiwan, the first Confucius Temple was built in Tainan in the year 1665. From here, Confucianism was gradually disseminated island wide. Now, more than 300 years old, the beautiful ancient architecture, which used to play a key role in education and national rites, has been transformed into a venue for cultural activities, as well as a famous tourist destination. It preserves the ancient Chinese style and the unique style of Taiwan and symbolizes the imperishable spirits of Confucianism for love and humanity. Every building in this temple has profound historic meanings.

The exhibitions at National Museum of Taiwan History are fun and vivid, suitable for both children and adults. The permanent exhibition, "Our Land, Our People: The Story of Taiwan", employs solid objects to chronologically demonstrate various cultures and prosperous life types in Taiwan so that the audience can easily understand the historical processes of Taiwan.

The Hayashi Department Store, located in the Mid-West District of Tainan, was established by a Japanese businessman, Hayashi Houichi in 1932. It was the grandest department store in southern Taiwan at that time, and the second largest department store in Taiwan. After sitting idle for an extended period of time, it was listed as the cicty’s historic site in 1998. Its renovation started in 2010 and was completed in 2013. The Cultural Bureau of Tainan City outsourced its management to a private company. Eventually the Hayashi Department Store returned as a “Cultural Creative Department Store” in 2014 and has become a famous Tainan tourist spot.

Located in the suburb of Tainan city, the Ten Drum Cultural Village separates itself from the noisy city with quiet forest trails. Its near vicinity to Tainan city provides the citizens a new cultural scenic spot. It consists of 16 old factories constructed in the Japanese era. The Ten Drum Cultural Creative Group took over the site in 2005 and started to revitalize the idle site. Under the planning of internationally acclaimed designers Guocang Liu and Shizong Ye, the 100-year-old Rende Sugar Refiner was converted into a cultural village, featuring the Ten Drum Art Percussion Group to become the first drum theme international art village in Asia.

The Guanzihling Hot Spring in Tainan County along with three other Hot Spring sites in Beitou, Yangminshan, and Sihchongsi are four major Hot Spring sites in Taiwan. Guanzihling Hot Spring is a kind of alkalinity carbonate hot spring, murky and with sulfate. This is why the hot spring is black and satiny in touch . The main distinguishable feature of Guanzihling Hot Spring is its mud color quality, which is therapeutic for skin allergy, tiredness elimination and beauty treatment. Containing more than one hundred kinds of minerals, it is believed that the Hot Springs have a curative effect for gastrointestinal chronic diseases and skin diseases. It is a spring to keep good health. Guanzihling covers a very extensive area. Besides, historical sites like Dasian Temple, Biyun Temple, and various tourist sites such as LingdingPark, HongyePark, and Haohanpo Hiking Trials have all integrated in a Hot Springs Theme Area that has become a must-visit tourist site.

The little stand, located next to Wu Miao (Wu Temple), is famous for its shrimp meatballs. Ba wan is a glutinous, half-translucent gem, most beloved for its Q (the Chinese term for al dente or chewy) texture. The mega-dumpling is a pocket of pork, shiitake and bamboo sprouts topped with sweet and sticky sauce. Some vendors like to add a sprig of cilantro for color. The four-decade-old Martial God Rouyuan near the State Temple of the Martial God makes a fantastic variation that draws long lines of hungry diners.

http://www.tsrd.com.tw/about_en.php
Constructed by the Tainan Spinning Co. Ltd., the T. S. Dream Mall opened in the year of the Goat (2015). Acknowledged as one of the top five most-visited scenic spots, it has become the new tourist attraction in the East district of Tainan.

One of the most popular night markets in Tainan, Tainan Flower night market is well organized and offers a wide array of local Taiwan snacks, from fried chicken, grilled seafood, oyster omelet, stinky tofu to exotic snacks such as Singapore Laksa, , Japanese takoyaki and sushi, Indian Teh Tarik and so on.
Address: The intersection of Hewai Rrd. and Hai-An Rroad
Opening hours: Thur, Sat and Sunday from 6pm till 1am